Celebration of the 500th Anniversary of the Protestant Reformation
Sermon preached on Sunday, Oct 1
The Reverend Rob Hartley


I was baptized in a church in Columbia as an infant in Jan, 1948.  My parents and godparents took the baptismal vows on my behalf and vowed to raise me in the Church. They and my church family did just that. 12 years later in a church in Mt Pleasant, SC, I confirmed those baptismal vows, making the Faith my own.  The Faith that was planted in me in those years took root, shaping my relationship with God, my understanding of the world, and my purpose and place in it.


I was given my first Bible in those days by my Godmother.  This Bible, tattered and old like me, continues to be a symbol of the what was planted in me.  My roots were sunk deeply into the biblical worldview- a worldview that I was to find to be unambiguous, sure and true.  I may not have always walked faithfully the path that my feet were first placed upon back in those days, but I knew where the path was and how to find my way home.  Interestingly, over a half-century later, I was to serve as an ordained clergyman in the same church in Columbia in which I had been baptized those many years earlier.  Today, my bishop, under whose authority I presently function, is resident at the parish in which I was Confirmed.  By the grace of God, I have not strayed far from my roots.


In our Epistle reading this morning, 2 Timothy 3:14-17, Paul writes to Timothy about this sort of faith that is rooted in Scripture and which I received as a child:


14 But as for you, continue in what you have learned and have firmly believed, knowing from whom you learned it 15 and how from childhood you have been acquainted with the sacred writings, which are able to make you wise for salvation through faith in Christ Jesus. 16 All Scripture is breathed out by God and profitable for teaching, for reproof, for correction, and for training in righteousness, 17 that the man of God may be complete, equipped for every good work.


In October we are launching into our celebration of the 500 anniversary of the Protestant Reformation.  One of the marks of the Reformation was a renewed emphasis and sensitivity to the primacy of Scripture.  This had been largely lost in the medieval Church and displaced with other sources of authority; moreover, the Bible was almost totally inaccessible to the common person.  The Protestant Reformation was largely a reaction to this and to other deviations from the Apostolic Faith that had encrusted the Church through the centuries.


In my growing-up years I was also given, along with my first Bible, my first prayer book.  The Book of Common Prayer was first composed in 1549 by Archbishop Thomas Cranmer at the dawn of the Reformation in England.  This book placed both worship and Scripture in the hands of the people.  We will learn more about the BCP in weeks to come, but let me read to you once again the opening collect we prayed this morning.  It was composed by then Archbishop of Canterbury Thomas Cranmer for the first Book of Common Prayer as an expression of this return to Sola Scriptura as the foundation of our Faith.  Here it is in old English as Cranmer pinned it:


BLESSED lord, which hast caused all holy Scriptures to bee written for our learnyng; graunte us that we maye in suche wise heare them, read, marke, learne, and inwardly digeste them; that by pacience, and coumfort of thy holy woorde, we may embrace, and ever holde fast the blessed hope of everlasting life, which thou hast geven us in our saviour Jesus Christe.


Thomas Cranmer, along with other bishops and clergy of the English Church, had long kept one eye on the reforms on the Continent led by Luther, Calvin and others.  We will be learning more about the history of what would become known as the Protestant Reformation in this month ahead.  Cranmer grew into his awareness that reform was necessary in the English Church.  As King Henry VIII’s archbishop, however, Cranmer had to bide his time.  The English Church had been separated from Rome a number of years earlier primarily due to Henry’s personal needs and greeds, but Henry largely kept his thumb on any changes to the piety and practices of the Church, except where it served his purposes.  Upon the death of Henry in 1547, Cranmer moved forward with his reforms under Protestant King Edward VI.


During Edward’s Reign, three things were published in English under Cranmer’s leadership: A Book of Homilies in 1547; the first Book of Common Prayer in 1549; and Articles of Religion in 1553.  These documents defined the broad reforms to take place in the English Church, mirroring what was taking place on the Continent.


We have already talked a bit about the Cranmer’s prayer book- let us look at these other two Reformation documents in relation to our topic, Sola Scriptura: 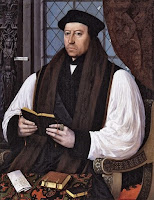 Cranmer’s Homilies:  Homilies were written to be read in all English parishes.   The very first homily is titled “A Fruitful exhortation to the reading of holy Scripture.”  Cranmer writes, “To a Christian man there can bee nothing either more necessarie or profitable, then the knowledge of holy Scripture, forasmuch as in it is conteyned [contained] GODS true word, setting foorth his glory, and also mans duety…  Therefore forsaking the corrupt iudgement of fleshly men, which care not but for their carkasse: let vs reuerently heare and read holy Scriptures, which is the foode of the soule (quoting Matthew 4.4).  Let vs diligently search for the Well of Life in the bookes of the New and Old Testament, and not runne to the stinking puddles of mens traditions (deuised by mens imagination) for our iustification and saluation.”


Articles of Religion:  Article VI- “Holy Scripture containeth all things necessary to salvation: so that whatsoever is not read therein, nor may be proved thereby, is not to be required of any man, that it should be believed as an article of the Faith, or be thought requisite or necessary to salvation.”  [Article VI goes on to describe which books make up Holy Scripture and are canonical and authoritative.]


The Reformation, therefore, recovered for us Scripture as the sole and ultimate authority for Christian living.  This does not mean that tradition, or the teaching offices of the church, or the power of human intellect and reasoning are not useful and edifying to the faith, but all must be tested against God’s written Word.  The Holy Spirit, who inspired the writing of Scripture, is also intimately involved in guiding the individual Christian life and illuminating Scripture for the believer.  We can test to see, however, that we are indeed listening to the Holy Spirit and not some other spirit (such as the Spirit of the Age).  The Holy Spirit will not lead the believer contrary to the Word of God.


Finally, let me draw your attention to both our Old Testament and Gospel readings for this morning.  In our reading from Genesis 2:15-17, 3:1-5, we hear the story of God having created mankind places them in the garden and tells them they are to work it and keep it.  His Word to them: “You may surely eat of every tree of the garden, 17 but of the tree of the knowledge of good and evil you shall not eat, for in the day that you eat of it you shall surely die.”  The humans disregard God’s Word and listen to another voice- that of Satan… “Did God really say…”.  They eat; sin, corruption and death enter Creation, and the man and woman are driven out of the garden into the wilderness to toil against a Creation now tainted by their disobedience.


In the Gospel reading today (Matthew 4:1-11), we have another story of listening or not listening to the Word of God, that of Jesus, not in a garden, but in the wilderness fasting for 40 days.  In contrast to Adam’s disobedience, the New Adam, Jesus, the new prototype for humanity, obeys the Word of God: “The tempter came to Jesus [as he does to Eve in the garden]. Satan says, “If you are the Son of God, command these stones to become loaves of bread.” 4 But Jesus answered, “It is written, ‘Man shall not live by bread alone, but by every word that comes from the mouth of God.’”  Thus Jesus, as the new model for humanity, opens the way from the wildernesses of our lives back into the Garden, reversing the curse of the fall, and allowing us to once again walk with our Heavenly Father in cool of the evening, to use the imagery of Genesis.  What is contrasted here in Genesis and Matthew is the disobedience of Adam and obedience of Jesus’s to the Word of God.


So, today we celebrate the great Reformation theme, Sola Scriptura.  We are to live, not by cleverly crafted words and ways of this world, “but by every word that comes from the mouth of God.”


To God be the Glory! Amen.

Posted by North Augusta Anglican at 7:20 AM No comments: