A Five-Week Lenten Study on the “Atonement”


Behold, the Lamb of God

A Five-Week Lenten Study on the “Atonement”


This Wednesday’s study for the 3rd Week in Lent

We will look this week at the Christian reality that we are “The ransomed of the Lord,” by exploring the Old Testament theme of “redemption” (redemption in Hebrew is גָּאַל, pronounced gaw-al).  To do this we will look at the Old Testament story of Ruth and how Boaz is Ruth’s “Kinsman-Redeemer.”  Jesus, Paul and Peter all pick up this theme to describe our deliverance from bondage to sin- that we are ransomed, redeemed through the redeeming blood of the Lamb of God.  Peter writes in 1 Peter 1:18-19:


You know that you were ransomed from the futile ways inherited from your ancestors, not with perishable things like silver or gold, 19 but with the precious blood of Christ, like that of a lamb without defect or blemish.


Conclusion: Jesus is our Kinsman-Redeemer. 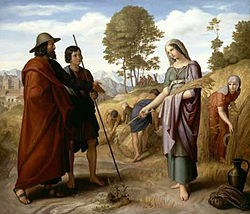 Posted by North Augusta Anglican at 7:41 AM No comments:

Diocese of South Carolina votes to join our Anglican Province

This past week, Anglicans in the lower part of the state under The Diocese of South Carolina, a diocese that disaffiliated with The Episcopal Church a few year ago, has now become part of our Anglican Province, the Anglican Church in North America (ACNA).  The Diocese is composed of 52 parishes and approximately 23,000 baptized members, and is one of the oldest religious districts in the United States.  The Diocese has several of the oldest, operating churches in the nation.

On a persona note, this is a particularly significant occasion for me, for it was this diocese in which I was formed as a Christian and grew up in my relationship with the Lord.

On behalf of all of us here at Holy Trinity, welcome!

The following is a reprint from the Diocese of South Carolina website-   http://www.diosc.com/sys/index.php


SUMMERVILLE, SC (March 11, 2017) – Today at its 226th Annual Convention, the Diocese of South Carolina voted unanimously to affiliate with the Anglican Church in North America (ACNA).

“I cast my vote to affiliate with the ACNA with eager and expectant faith,” said the Rt. Rev. Mark J. Lawrence, the 14th Bishop of South Carolina in his address to the convention. “I believe God has called us to this and I believe we will find a deeper richness in our vocation; fuller fellowship in the Spirit; a more zealous thrust in mission.  But most of all, I believe a door will be opened, the fresh winds of the Spirit will blow, and a caged eagle will soar.”

Affiliation with the ACNA brings the Diocese into full communion with an organization of 111,853 members in 966 churches and 32 dioceses spread across Canada, the United States, and Mexico.

Founded in 2009 at the urging and with direction from Anglican primates of the Global South, the ACNA represents the unifying of a number of different groups in terms of theological approach and worship emphasis including evangelicals, charismatics and Anglo-catholics.

The Most Rev. Foley Beach, Archbishop of the Anglican Church in North America, who spoke to the more than 350 convention delegates and clergy attending following the vote said,  “I am thankful for Bishop Mark Lawrence, for his steadfast and Godly leadership, for his friendship, and for his humility throughout this entire process. Your witness in mission, in scholarship, and steadfast commitment to the historical teaching of the Bible is commendable. You are bringing with you many gifts that will further strengthen our Province, and the larger Anglican world.”

“From Pentecost on Christians are meant to be connected,” said the Very Rev. Craige Borrett, Rector of Christ-St. Paul’s, Hollywood, who served as Chairman of the Provincial Affiliation Task Force for the Diocese, and who recommended this affiliation last March. “We’re family. And with this decision we’re uniting ourselves with a diverse group of biblical, orthodox, Anglicans who are recognized by the majority of the Anglican Communion.  I’m excited about the impact we can have as well.”

“The ACNA is full of ministry friends and colleagues we have known and worked with for many years,” said the Rev. Canon Jim Lewis. “It is a joy to now be under one roof with them.  We’ll be blessed to have the benefit of the work they’re doing in important areas like church planting.  And we look forward to sharing our assets as well – things like our strong youth and grandparenting ministries and our beachfront camp and conference center, St. Christopher’s.”

The Convention was also blessed with a recorded greeting from the leadership of the Anglican Communion’s GAFCON movement, The Most Rev. Peter Jensen and the Most Rev. Peter Akinola.  “In times like these we need to be able to partner with fellow Christians who share common faith with us,” said the Archbishop Akinola.  “We need to stand together to make a difference in this world of darkness where people are deviating day by day from the standards of scripture. We know that in the ACNA we can stand together to work for the glory of God.”

The ACNA Provincial Assembly will meet in June of this year and take up the application of the Diocese for affiliation. The expectation is of an enthusiastic welcome.

Posted by North Augusta Anglican at 4:31 AM No comments: