Dear Heavenly Father, Creator of all things, and Sustainer of all that is good, wholesome and right, we approach your Throne of Grace on behalf of our nation. 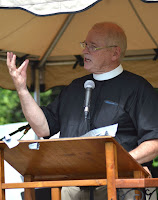 But in the midst of it all, Lord God, we cannot help but give thanks to You for being our God and calling us to be Your people.  We thank You for our creation, preservation, and all the blessings of this life; but above all for your immeasurable love shown us in our redemption through our Lord Jesus Christ.  And, we pray, give us such an awareness of all your mercies, that with truly thankful hearts we may show forth your praise, not only with our lips, but in our lives, by giving up ourselves to your service, and by walking before you in holiness and righteousness all the days of our life; through Jesus Christ our Lord, to whom, with You and the Holy Spirit, be honor and glory throughout all ages. Amen.
Posted by North Augusta Anglican at 2:26 PM No comments: 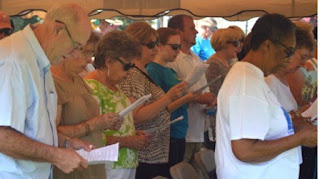 "These are different sort of times we live in- we know it as post-modern and post-Christian.   It is, however, coming to be more than that.  It is becoming anti-Christian.  We are here today to publically and very specifically pray into that."

"In terms of our Judeo-Christian foundation as a nation, we have lost our footing.   We no longer, at least publically, acknowledge God’s grace as the underpinning of this great nation.  We have jettisoned values that have allowed this nation to prosper and to stand out among the nations of the world.  We have forsaken our Christian birthright." 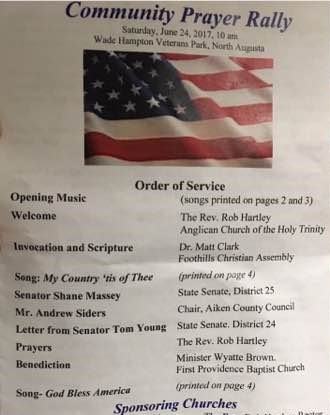 "Eph. 6:12 tells us, “our struggle is not against flesh and blood, but against the rulers, authorities and powers of this dark world, and against the spiritual forces of evil in the heavenly realms. All that is good and right about our nation is therefore being laid defenseless before Satan.  We as a nation have made ourselves as vulnerable to Satan’s wiles as all other nation on this planet.  American exceptionalism, clearly a gift from God, is being devoured, and we now are playing this game society-building on Satan’s home court rather than in the courts of the Lord."
"But as Scripture says, “the battle is mine, says the Lord.”  God’s weapon is our faithfulness and prayers of His people.  I am thankful for the faithfulness of Christians such as you who are willing to come together on this hot summer morning to pray and stand in the gap for our country."

"The 19th C pastor and song-writer, Samuel Francis Smith, understood the beauty and power of real freedom.  And he knew that true freedom comes only from the One True God. our King.  Apart from the living God freedom is impossible.  Smith calls God the "Author of Liberty" in the hymn we will sing together today, "My Country 'tis of Thee."

Posted by North Augusta Anglican at 2:09 PM No comments:

Posted by North Augusta Anglican at 3:54 AM No comments: